The cause of fairy rings was the subject of much folklore in Europe in Medieval times. Most agreed that the rings likely were caused by elves dancing in rings, but Germans thought they were burned into the ground by dancing witches (Hexenringe). Entering a ring could result in very bad luck, including loss of any eye or even crumbling into dust; this was especially true on Halloween. Children could avoid trouble after entering a ring, by running around the ring nine times; ten times could put you into much more trouble. More scientifically oriented nineteenth century Americans attributed the rings to the activities of ants or snails or perhaps lightening. Shantz and Piemeisel, excavating fairy rings in Eastern Colorado in 1917, were the first to suggest that fairy rings killed vegetation by rendering infested soil impermeable to water. Even today, the presence of fairy rings conjures interest and mystery, until they start killing your grass. 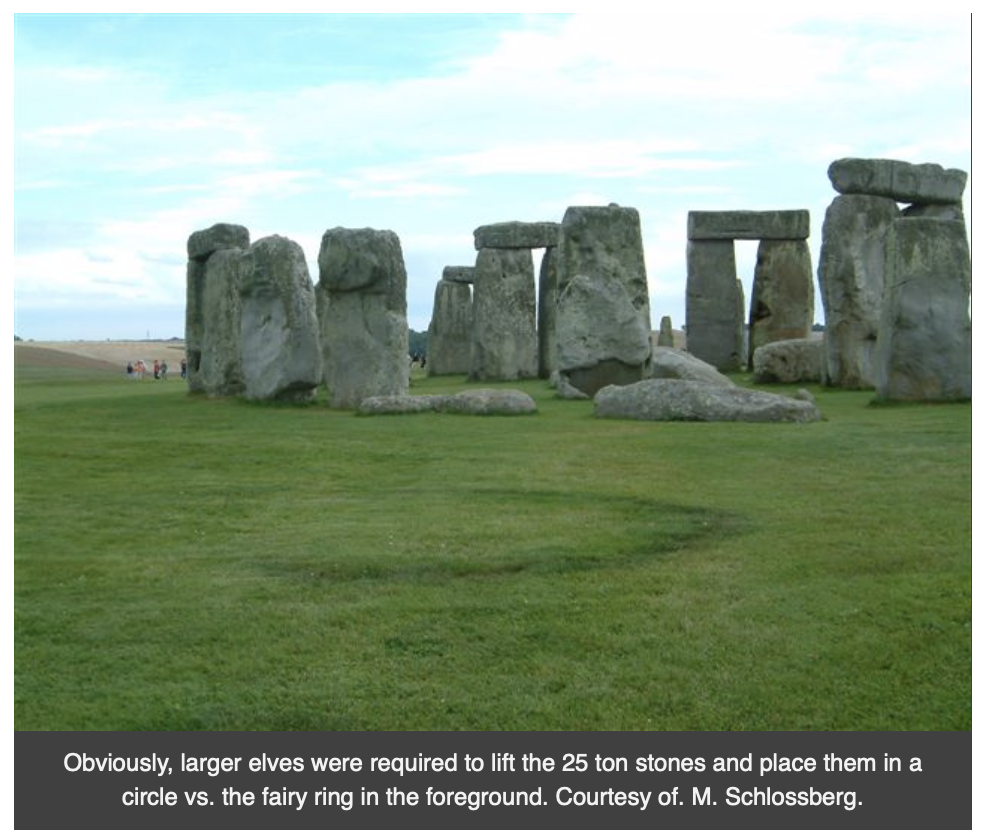 Fairy rings are commonly found in turf and pastures and may be caused by over 50 or more species of fungi.  Fairy ring fungi belong to a group known as the basidiomycetes or “mushroom fungi,” which includes puffballs.  Among the more common mushrooms associated with fairy ring are Agaricus ssp, which are closely related to the fresh-white mushrooms you buy in the grocery store. Lycoperdonspp. and Vascellumsp. (known as puffballs) are the primary cause of fairy rings on golf greens. There are many other basidiomycetes commonly found around home, golf courses, mulched  and wooded areas including bract/polypores (major wood rotter’s); birds nest, club, toothed, earthstars, morels, stinkhorns, jelly fungi and artillery fungi. The basidiomycetes play a major role in nature through their ability to degrade organic matter. In particular, they break-down the toughest type of plant organic matter called lignin. Lignin is the strengthening material in cell walls and it occurs in its largest amounts in wood.

Most of the fungal body (a network of filaments called mycelium) of a fairy ring resides in thatch and  below ground. At some point in time, usually beginning with warmer rainy weather in spring, these fungi produce above ground, spore producing fruiting bodies (i.e., basidiocarps = mushrooms, and puffballs ). The entire reproductive process remains a mystery to this day; i.e., how can a mass of mycelium in soil  transform itself to produce elaborate, fleshy  above ground reproductive structures?  The typical mushroom has a cap and stem. The underside of the mushroom cap is composed of gills, upon which spores are produced. Puffballs do not produce caps and spores are borne within white, fleshy and egg-shaped fruiting bodies. Puffballs often have fleshy warts or spines on their surfaces. Mushrooms and puffballs turn brown as they age and when they crack or are crushed they release large numbers of spores. Spore color is helpful in identifying basidiomycetes; they can be white, yellow-brown, pink, purple-brown or black. Spores or transport of infested soil spread fairy ring fungi, but it remains a total mystery how a single spore or fragment of mycelium can give rise to  perfect green circles or sickle-shaped arcs in turf. Somehow, the fungus initiates growth at a central point (via spores or mycelial fragments) and continues outward in all directions (i.e., radial) at an equal rate. 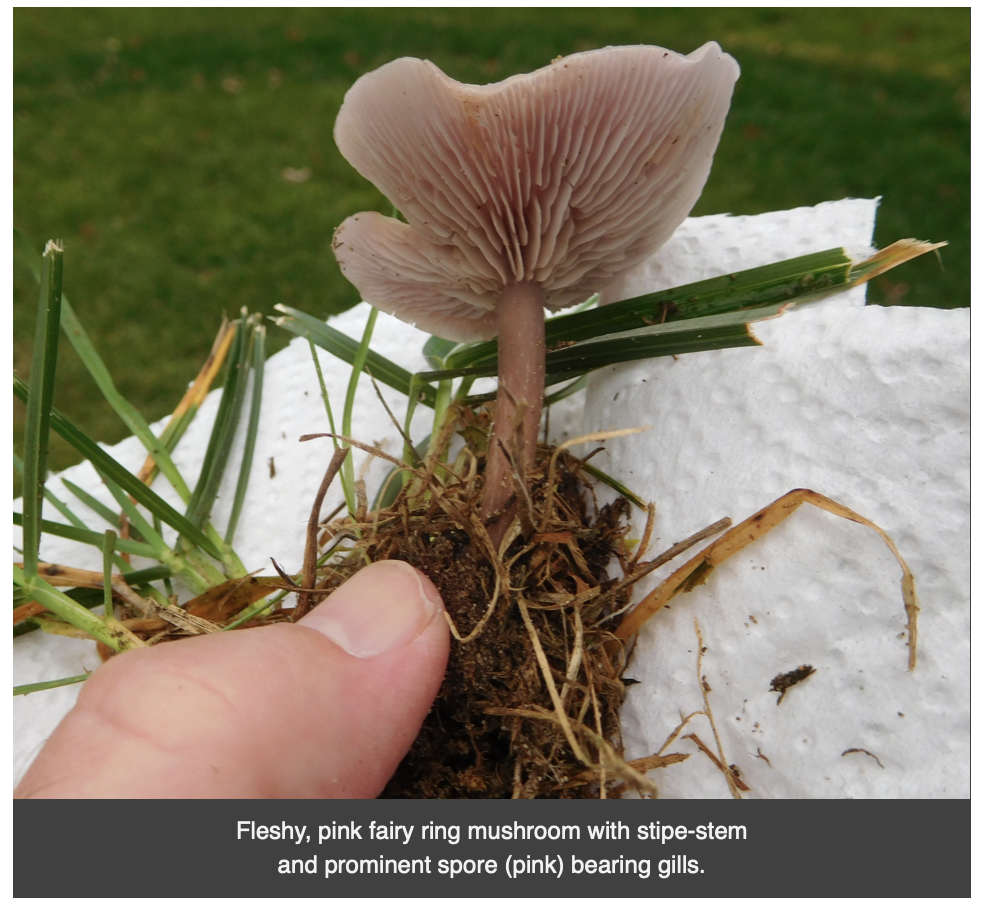 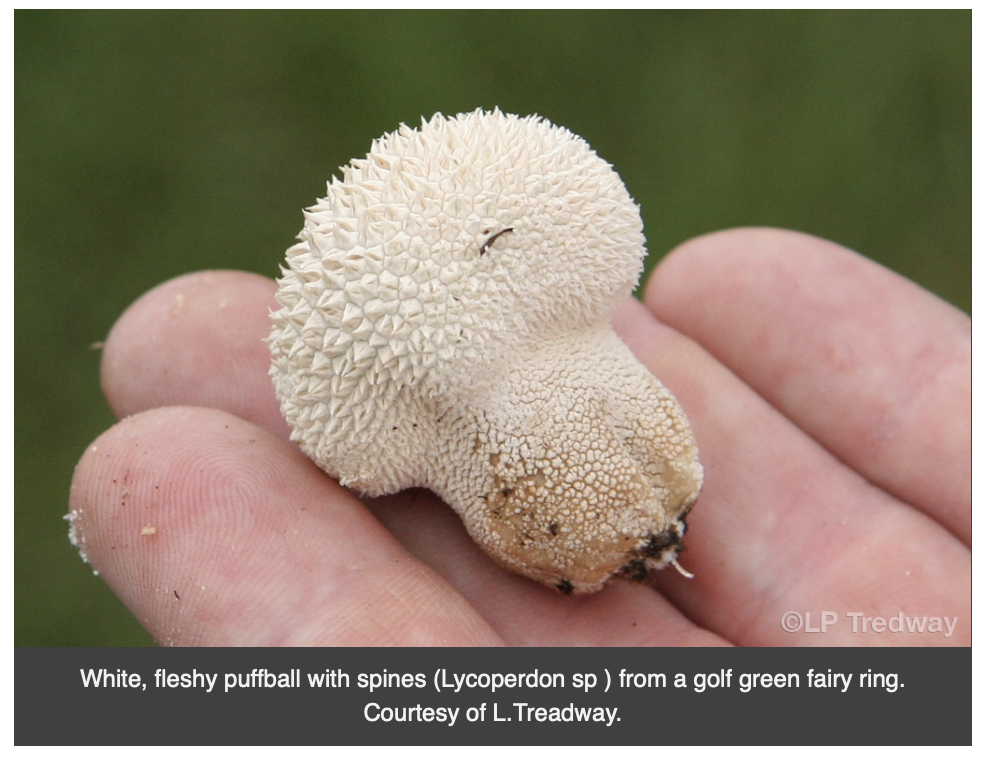 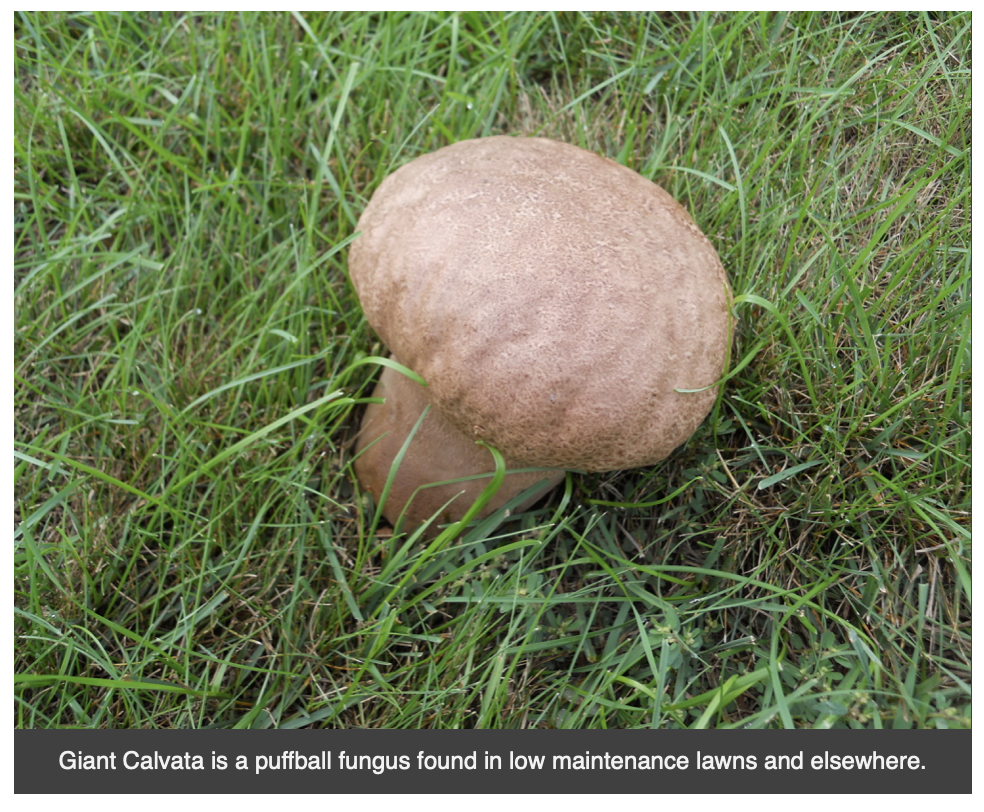 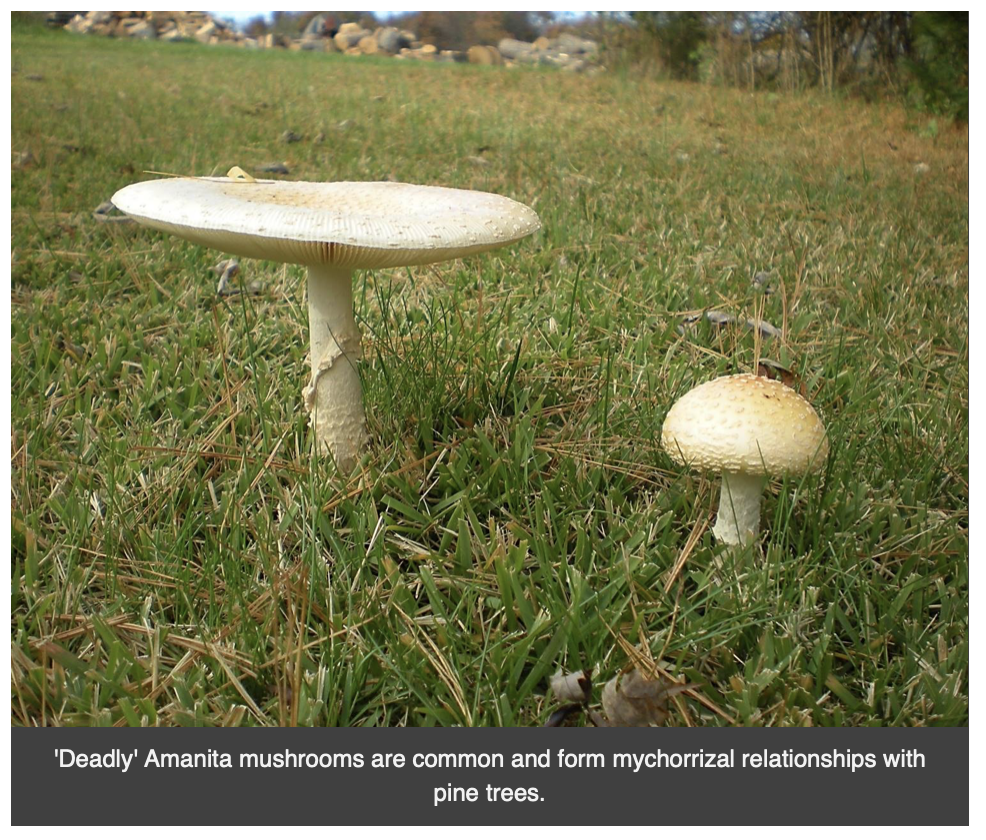 The presence of fairy rings can remain evident all year, especially in lawns. It is not unusual for rings to disappear and then reappear at a later time. They are more notable and numerous in wet years, but are most destructive when weather conditions become hot and dry.  Fairy rings are among the most destructive turf diseases, but they are not pathogens. Some species do form symbiotic mycorrhizal relationships, which involves a non-invasive penetration of root epidermal cells.  This mutually beneficial relationship provides the fungus with plant sugars and  nutrients, while aiding in the uptake of nutrients for the plant, especially phosphorus.  This symbiosis is largely associated with trees.

Type 1:Those that kill or badly damage plants in rings or arcs.

Type 2:Those that stimulate grass, causing the formation of rings or arcs of dark- green turf.

Type 3:Those that do not stimulate grass and cause no damage, but produce fruiting bodies (i.e., mushrooms or puffballs) in rings or arcs. 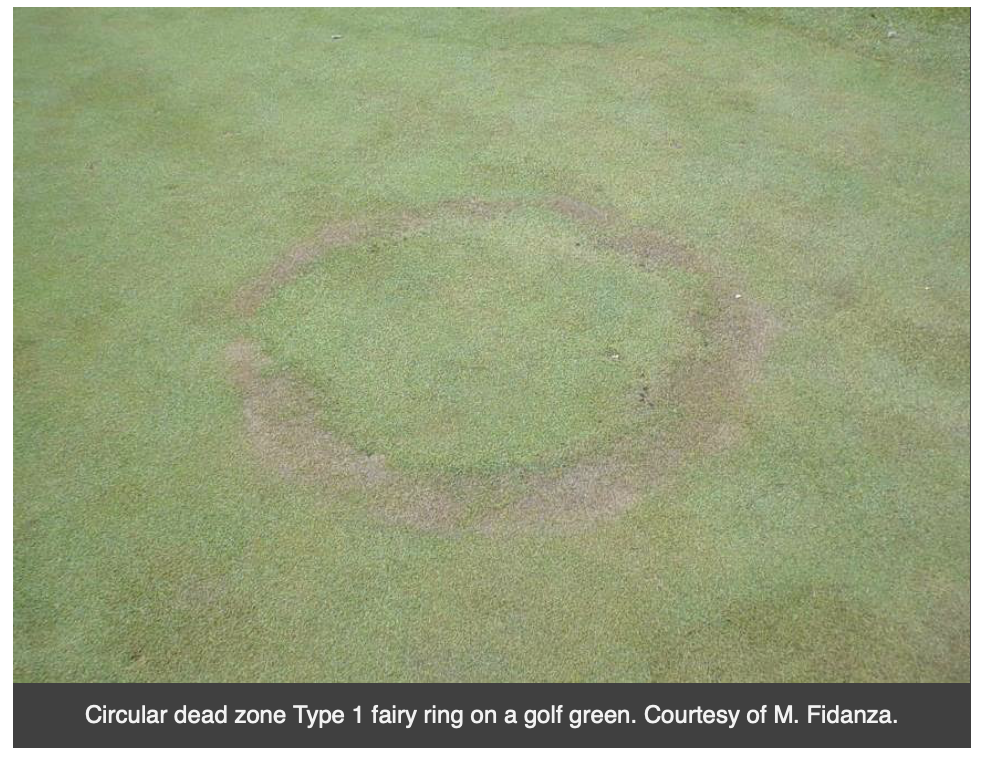 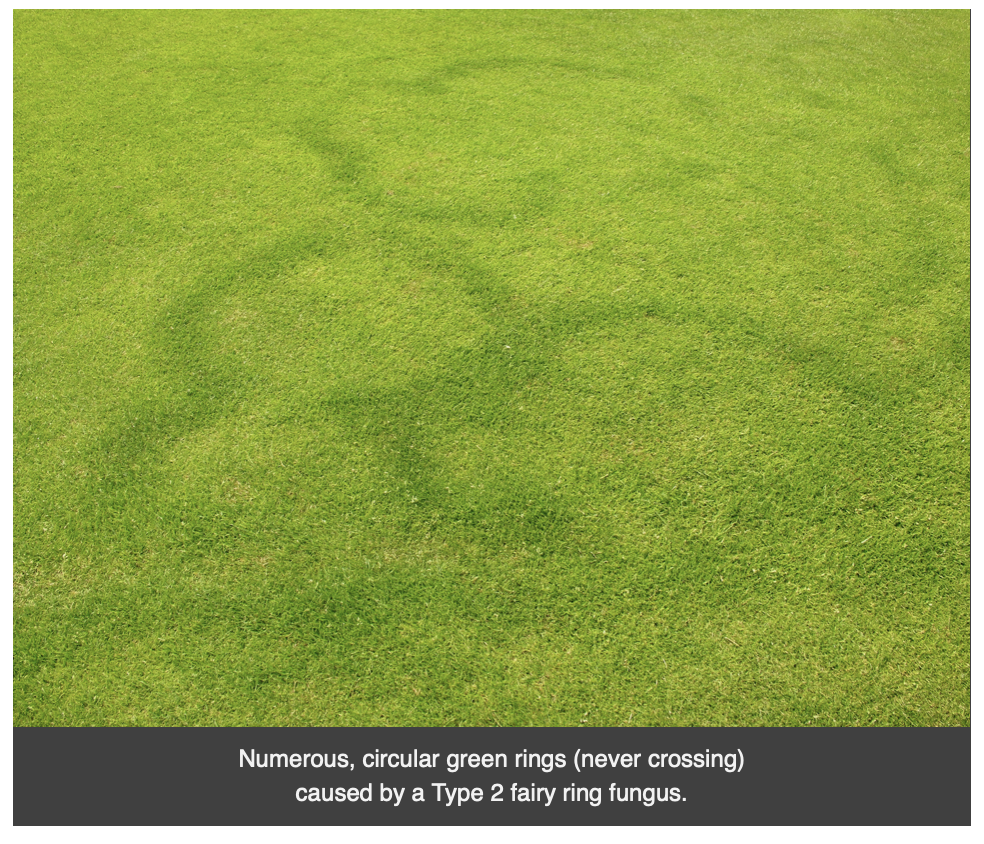 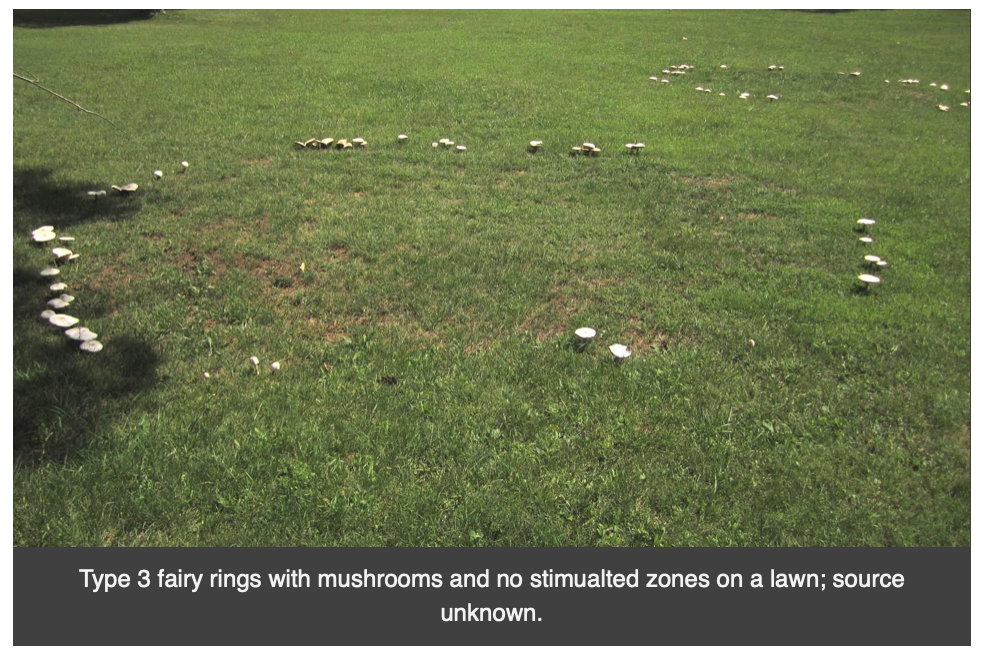 Fairy rings vary in size from 1 to 20 feet or more in diameter, and become larger each year.  Indeed, in parts of Europe, rings as great as 2000 ft. in diameter have been observed in pastures and are believed to be over 100 years old. Rate of outward movement, as well as overall ring diameter, is determined by soil and weather conditions. In general, rings grow more rapidly in light-textured (i.e., sandy loams) and moist soils than in heavy clay and dry soils.  Rings fade in the autumn or winter, but bare zones remain visible until turf recovers via stolons, rhizomes and/or tillering.  Fairy rings are most conspicuous during hot and dry summer periods, but can fade rapidly with the advent of rainy weather. When soil moisture is abundant, dark-green arcs or rings may be evident, while the dead zone is absent.  With the advent of warm to hot and dry weather, however, the dead zone appears. 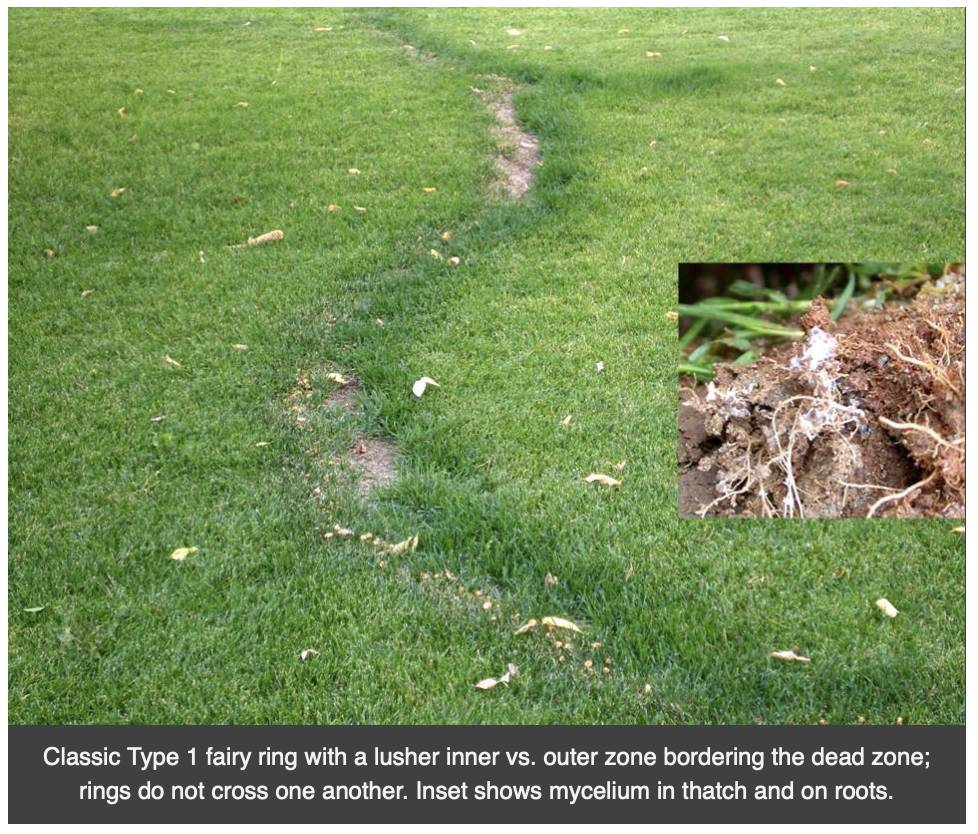 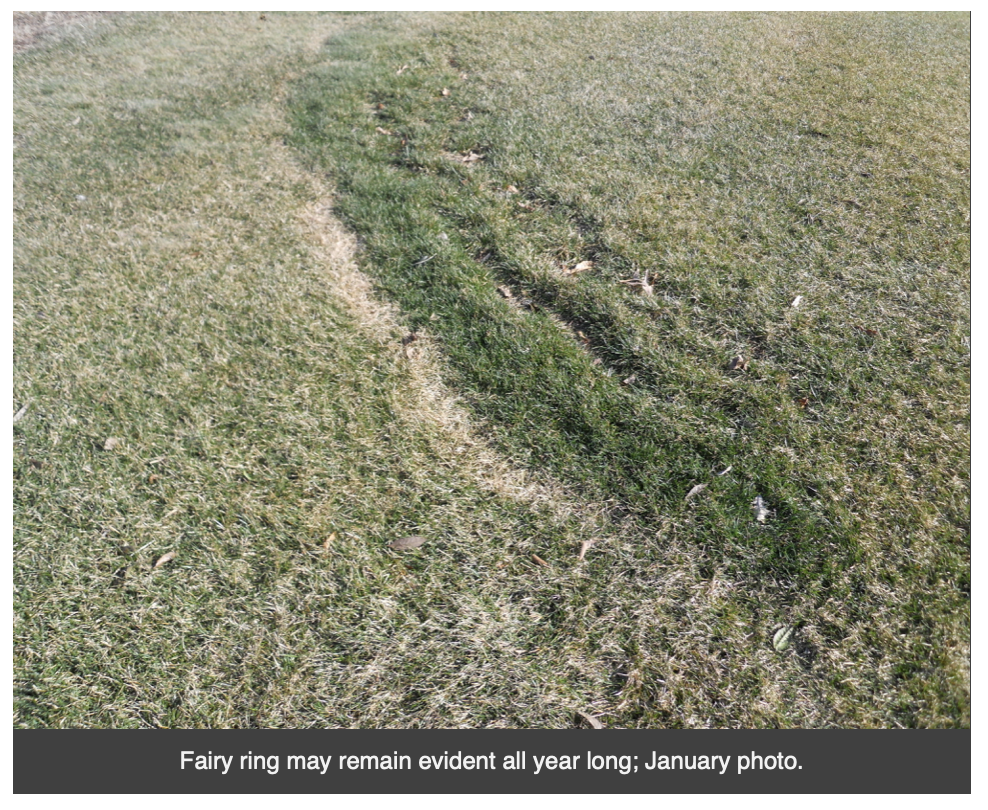 The most destructive rings are of the Type 1 variety.  Type 1 rings are very common in lawns and on golf courses. In lawns, roughs and fairways, Type 1 rings initially appear as circles or arcs of dark-green grass, but the dead zone does not appear until dry periods in summer.   Classic Type 1 rings are distinguished by three distinct zones: an inner lush zone where the grass is darker green and grows luxuriantly; a middle zone where the grass may be wilted or dead; and an outer zone in which the grass is slightly (i.e., less lush vs inner green zone) stimulated and/or darker green. The distance from inside of the inner zone to outside of the outer zone may range from a few inches to a foot or more wide. The distinct double green zones, with a dead zone are uncommon on golf greens. On greens, a single green zone usually develops first, which may or may not wilt and develop a dead zone.

Darker green, stimulated zones classic to higher cut lawns and roughs are the result of the breakdown of organic matter, which releases nitrogen and results in more vigorous leaf growth.  The outer green zone is caused by the breakdown of thatch and organic matter by the fairy ring fungus, which liberates nitrogen.  The inner green zone, which is wider and more prominently dark-green, develops in response to the release of nitrogen as bacteria and other microbes degrade aging or dead mycelium of the fairy ring fungus. Mushrooms or puffballs are produced at the junction of the bare and outer green zones.  Rings, however, may produce few or no mushrooms, especially on golf greens.

Type 2 fairy rings are commonplace and can appear in early spring and remain evident until winter. Type 2 rings tend to come and go, but are most prevalent during wet summer periods. Type 2 fairy ring can develop into a Type 1 fairy ring during hot and dry periods. Fruiting bodies develop within the darker green zone following rainy weather in summer. Type 3 rings of mushrooms or puffballs growing in a ring or arc are mostly found in infrequently mowed fields and lawns, and usually appear rapidly after a rainy period. Classic Type 3 rings generally do not develop a stimulated green zone. 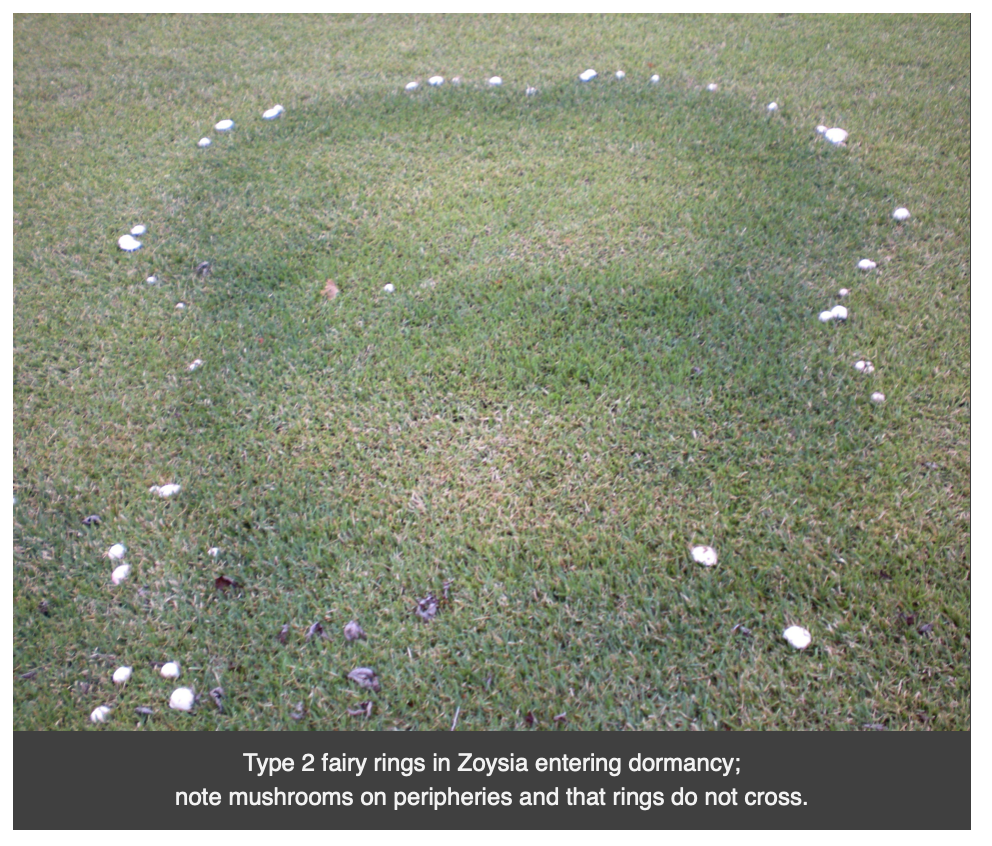